A Child At Heart: Hans Christian Andersen
By Suzanne Dean

The main reason Hans Christian Andersen became a literary genius was that, as he explained in his autobiography, he remained a child all his life.
Andersen, the father of the literary fairy tale, is Denmark’s greatest author. While known mostly for children’s stories, he was a prolific travel writer, novelist, poet and playwright. He even invented his own visual art form—paper cuts.

He had good reasons for getting “stuck” in childhood. His beloved father died when he was 11. His mother was an alcoholic. His half-sister was probably a prostitute. He left home at 14 and supported himself from then on. 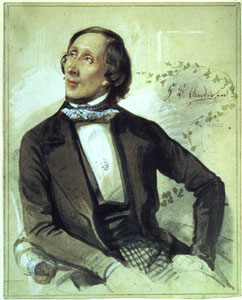 Childlike Wonder
In a new biography, out to mark Andersen’s 200th birthday, he is “revealed a man who was self-centered, vain and emotionally needy,” writes a reviewer. Yet a “childlike wonder and innocence” blossomed through his inner turmoil.

“His tales are often tragic or gruesome in plot,” says Columbia Encyclopedia. “{But) his sense of fantasy, power of description and acute sensitivity contributed to his mastery of the (fairy tale) genre.”

Andersen was born in 1805 in Odense, one of Denmark’s larger cities at the time. His father was a frustrated shoemaker who cared much more about books, plays and ideas than about shoes. He awakened the same interests in his son. “My father gratified all my wishes,” Andersen wrote in his autobiography. “I possessed his whole heart; he lived for me.”

Had An Epiphany
A few years after his father died, at age 14, Andersen struck out for Copenhagen to try to get into the theater. No one would hire him as an actor, dancer or singer. But when someone along the way casually referred to him as a poet, he had an epiphany.

“It went through me body and soul, and tears filled my eyes,” he wrote later. “I knew that, from this very moment, my mind was awake to writing and poetry.”
A theater director took Andersen under his wing, arranged for him to go to school, and ultimately helped him get into the University of Copenhagen. A year after entering the university, at age 24, he published a poem. He followed it with a musical drama that was produced by the Danish Royal Theater.

Novel A Smash Hit
At 30, he published a novel, “The Improvisatore.” Like many of his works, it was biographical, describing a poor boy’s integration into society. The book was an international smash hit and became the most widely read Andersen work throughout his lifetime.

Beginning when he was about 26 years old, he became the 19th Century equivalent of a jet setter. During his lifetime, he took 29 trips outside Denmark to Germany, France, Sweden, Spain, Portugal, Italy, the Middle East, Asia and Africa. Travelogues became one of his important writing forms.

He hob-nobbed with noted intellectuals of the time, including Goethe, Victor Hugo, Alexandre Dumas and Charles Dickens. (Andersen and Dickens didn’t get along.) According to a biographer, the boy who had practically been a street urchin following his father’s death “came to be a regular guest at Danish and foreign manor houses and at the residences of kings and princes in Denmark and abroad.”

Fell In Love Twice
As a boy, Andersen was tall, awkward and unattractive, and was teased for being effeminate. Those experiences might have undermined his confidence in his masculinity and contributed to his remaining a bachelor. Nonetheless, he fell in love twice.

The first time was in his 20s. The woman, Riborg Voigt, married somebody else. Andersen wrote to a friend, “I do wish that I were dead.” When he died at 70, he had a leather pouch around his neck containing one of her letters.

In his 30s, he fell in love with Swedish opera singer Jenny Lind. She has been a homely teenager and related to his story of the “Ugly Duckling.” His story, “The Nightingale,” is thought to be a tribute to her. But apparently in Lind’s mind, the relationship was platonic. In 1844 she wrote to Andersen, “Farewell. God bless and protect my brother is the sincere wish of his affectionate sister, Jenny.”

Started Writing Fairy Tales
In 1935, after his novel took off, he started writing the fairy tales that would make him famous forever. In the tradition of serials such as The Arabian Nights, he wrote a new volume almost every year up to 1872. Many of the books were issued at Christmastime.

Through characters like ducklings and mermaids, he expressed his personal dilemmas. “The Ugly Duckling” that turned into a swan symbolized his own evolution from a gangly, impoverished boy to an author who was the toast of Europe.

In “The Little Mermaid,” the mermaid’s discomfort at leaving land for the sea was possibly a metaphor for his leaving Odense, not sure if he would be accepted in Copenhagen.

In fairy tales, Andersen, with a characteristically tart Danish wit, uses child characters to make moral statements. After all, children are usually more candid than adults. An example is in “The Emperor Has No Clothes.” Andersen writes, “’But he has nothing on at all,’ said a little child at last. ‘Good Heavens! Listen to the voice of an innocent child,’ said the father, and one whispered to the other what the child had said. ‘But he has nothing on at all,’ cried at last the whole people.”

Another Dimension Of Genius
As if being a great writer of all types of literary works wasn’t enough, his paper cuts showed another dimension of his artistic genius. As he recited tales to an audience, he often took a piece of paper, folded it a few times, and with gigantic scissors, cut out elaborate scenes and expressive figures. Typically, a paper cut represented a different tale that the one he had just recited.

Andersen died in 1875 and was buried in an everyday family plot in a Copenhagen cemetery. His grave was marked with his birth and death dates and a stanza from one of his poems:

“The soul which in God’s own image is made
Eternal is—can never fade.
Eternity’s seed in our life doth lie
The body may fall, the soul cannot die.”

The Child Spoke Through Him
An essayist, Horace Scudder, writing in Harper’s a few years after Andersen’s death, summed up his unique contribution to literature. The ability to endow inanimate objects with life and personality, he writes, is strongest in childhood. “It is very apt to die out or become indistinct in later years. Andersen never lot this power; he cultivated it….He was the interpreter to the world of that creative power which is significant of childhood; the child spoke through him.