REGISTRATIONS ARE NOW BEING ACCEPTED FOR THE SCANDINAVIAN HERITAGE PARADE

Ephraim City anticipates that this years parade will< be very fun and interesting for all participants and spectators alike. The parade will give an opportunity to reflect upon the Scandinavian heritage of this part of the country. Each year the parade is well attended with local residents as well as many visitors who come for the weekend.

You will be contacted with a confirmation and information. All appropriate family friendly entries are welcome.

This year we would like to encourage a Scandinavian (VIKING) theme. Unfortunately, due to safety of all, there will be no candy thrown from floats. You are welcome to have an adult hand things out or throw candy from the ground.

The White Peaks Centennial Pipe Band will be enforce this year. White Peaks was organized in 1996 in honor of the centennial of the State of Utah. The band was created by Don Smith, who was taught by some of the world’s premier pipers and who has been teaching bagpipers at all levels for over 30 years. The band is an award-winning group that has travelled throughout the western United States and competed and performed at many of the Scottish festivals and parades in the area. The band is based in Payson, Utah, and offers free bagpipe lessons to anyone who would like to learn.

All entries need to print off the following wavier and bring signed to check in on the day of the parade.

On the day of the parade, entries will check-in at the corner of 300 South and 100 East (on the East side of Main street) starting at 9am, and will line up on 300 South to wait for the parade to start. The parade starts at 10 am at 300 South. The parade now extends and will end on 300 north. 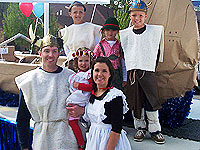 EACH YEAR THE PARADE KICKS OFF THE SATURDAY FESTIVAL IN AN EXCITING WAY!

WE LOOK FORWARD TO YOU JOINING US!