Located in the Pioneer Park 75 West 100 North. Come and stroll along our new sidewalks throughout the park. Sit in the shade on the conveniently located benches. Bring the family and have a picnic! Many service hours have gone into making Pioneer Park a hidden gem in our little community. 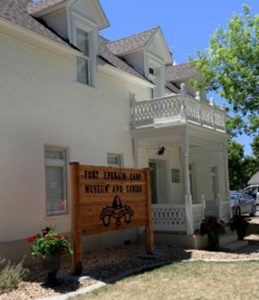 Hans A. Hansen was born in Denmark and immigrated to Utah in 1853. This American 1 and 1/2 story home with a central passageway plan was one of the first large homes built outside of the fort. He painted the doors with green paint he had brought from Denmark. The interior carved circular staircase was constructed of pine and consists of three sections expertly joined by master carpenter and painted to resemble oak. The center passageway and upstairs rooms and halls retain the original oak-grained woodwork. The exterior of the house is of adobe – a rough, mud brick-plastered over, and back then, was carefully scored off to simulate stone masonry with incised lines painted red. The home underwent a renovation I 2020/2021 and is now a modern museum housing many wonderful pioneer artifacts from our community.

This is where Canute Peterson  and Chief Black Hawk agreed on peace in our community. The Chief and his group went to each community and “smoked the peace pipe”. Efforts were made to save the tree but were unsuccessful.

Anders Christensen built this as a granary. It has a unique narrow tongue and groove ceiling that is still in its original state. Frank Bailey married Anders’ daughter and this became their home. Later it was called the “Honeymoon Cottage” because many Bailey family members started their married lives there. It has been used as a granary, home, and shop. It was moved to Pioneer Park in the early 90’s. it stood vacant and was being being vandalized until the Fort Ephraim DUP purchased it for $150. It has new floors , doors, and interior paint. It is filled with artifacts lovingly donated by Ephraim descendants, and cared for by the D.U.P.

Soren A. Sorensen built this cabin in 1879 on third South and Main Street. This cabin was preserved through the efforts of the City Council and DUP. After moving it to the Pioneer Park and decorated for Scandinavian Festival, it was vandalized, marked with graffiti and fire was set by an arsonist, which destroyed a portion of the new roof, east walls and floor. The quick actions of nearby citizens and merchant saved the cabin.

This water wagon was used to build the roads in the early days of Ephraim.

Marcus & Christine Hermansen converted to the church of Jesus Christ of Latter-day Saints in Denmark, and immigrated to Utah in 1886. Marcus had owned a windmill flour mill in Byrsted, Denmark. After arriving in Salt Lake City, they eventually made their way to Ephraim where Marcus was offered the position of running a little burr mill that was already in operation. The mill was known as the climax mill. The climax mill was a new type for Marcus to operate. This burr mill was named for the burr stones which were used to grind flour. These stones were a very special, hard type of stone found only in buhr, France. They were chiseled to be large, flat, and round. The flat sides were corrugated with a little crevice cut in one side of one stone and were put together so as to have an agitating motion to grind the wheat. When it was fine enough, the wheat (flour) went out through the little crevice ready to be sacked. These stones were made in many sizes usually ranging from 12 to 48 inches but could be up to 60 inches. These larger 60 inch stones were used the most here. as you can imagine, this was a slow process for making flour. The climax mill was located across the creek from guard knoll southeast of Ephraim. A group of men later built a new mill above the burr mill where the water ran more swiftly. The new mill made the burr mill obsolete, as the new mill was run by a water wheel.

This property was first deeded to Hans C. Jensen by George Taylor, Mayor of Ephraim City on January 17, 1872 (Block 14, Lot 2). At that time the property included the Ross P. Findlay Lot. Granary was moved to Pioneer Memorial Park in July 2003.

Hans came to Utah from Denmark and married Nellie Lundstein who came from Sweden. Hans ran the Christian Williardsen Lumber Mill located Southeast of Ephraim just below what was known as Guard Knoll. He milled the lumber for the home, granary and barn. The rock for the barn and the home were obtained from the Quarry in Pigeon Hollow. The barn was subsequently torn down by the City. The home, granary and barn were built by A. C. Nielson (called Mormon Preacher by the people of Ephraim).

Hans and Nellie had 10 children and they all lived in the Granary. Nellie died with the birth of her tenth child. One of the ten children was Amelia Dorothy Christina Jensen who married Christian Bjerregaard and one of their children was Helen Bjerregaard Rigby. Helen’s tireless work was instrumental in the initiation and success of the Ephraim Senior Center.

The objective of the DUP

– perpetuate the names and achievements of the men, women and children who were the pioneers in founding this commonwealth
– Preserving old landmarks
– Marking historical places
– Collecting artifacts and histories
– Establishing photographs, maps and all such data as shall aid in perfecting a record of the Utah pioneers